Updating your music collection with PowerShell

I’ve been banging my head against the wall on account of different music players which can’t play the subset of songs I have encoded as either Vorbis or AAC. So I’m slowly converting my entire music library over to MP3, which works everywhere, even if it’s less efficient.

But before I go digging through my old CDs I need to identify which albums I have to re-encode. My music is organized in folders by artist and then album, e.g.:

So this means I effectively have to list the names of folders containing non-MP3 music files. Fortunately Windows PowerShell makes this a one-liner (though admittedly it’s a pretty long line; the backtick is PowerShell’s line continuation syntax):

And thanks to PowerShell’s object-oriented pipes, this is done without having to worry about any quoting or whitespace issues.

The more I learn PowerShell, the less I find myself relying on Cygwin for simple Windows administration tasks. I think Microsoft did a nice job balancing all the different requirements they had to meet with PowerShell. At the very least, it’s good to finally see a strong command shell built into Windows.

I had a funny experience yesterday.

I don’t typically use Microsoft Outlook with my home email account. But it was bundled with the copy of Office 2010 that I installed a few months ago, and I figured: heck, if I have it anyway I might as well hook it up to my personal IMAP account. So I configured Outlook, played with it a bit, then promptly forgot all about it.

Fast forward to yesterday evening. I launch my copy of Outlook for the first time in months in order to try something with the calendar, but then I get distracted and walk away from the computer. Five minutes later my cell phone gets a message from my FreeBSD server:

A slight digression before I can get on with the story: I try my very best to be a good Internet citizen, and that of course means not allowing oneself to become a spam relay. Because this email server exists only for my personal use, it was simple to write a Perl script that monitors my Postfix logs and, if it sees anything grossly out of the ordinary sent out through the server, reconfigures PF to block outbound connections to TCP port 25. It seemed the responsible thing to do, especially since some PHP applications on my web server have permission to relay through this Postfix instance; and let’s face it, WordPress has a less than stellar security track record.

This script has never given me a false positive. So this was definitely cause for concern.

I shelled into my VPS and went straight for the mail logs. I was dismayed to find more than twenty entries like this:

All of them sent within seconds of one another, and all of them to random Gmail accounts and other recipients that I absolutely did not recognize. Worse, the messages had been sent through a properly SASL authenticated connection from my laptop (HELO noatun). To quote that old horror flick: They’re coming from inside the house!

I’ve heard tell of Windows viruses that will quietly send spam through the user’s configured Outlook mail account, so that the messages originate from a legitimate mail server and have a better chance of skipping recipients’ spam folders. I have no idea whether this is actually a common occurrence in the real world, but it’s plausible enough, and I couldn’t think of any better explanation why 24 messages had been sent out from my computer in a matter of seconds, all to recipients I’d never heard of. I still could not fathom how a spam bot might have made its way onto my laptop despite my precautions, but better safe than sorry…

Process Explorer and TCPView failed to reveal anything suspicious, so I shut down the laptop, yanked out its hard drive, hooked that up to another machine via a USB-SATA adapter, and started a full offline virus scan.

Meanwhile I kept poking around on the mail server. I had a bit of luck when I checked /var/spool/postfix/deferred — a few messages had been caught in the Postfix outbound queue when my script added its firewall rule. I was morbidly curious what had been sent.

…it was a freaking Message Disposition Notification.

Now sure, I knew all about email read receipts, but I’d immediately ruled them out as the cause of this behavior because all of my email clients, Outlook included, are configured to at least ask my permission before sending one: 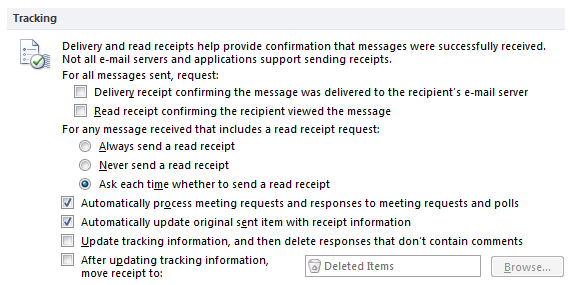 And anyway, I hadn’t read or deleted any email messages in Outlook, so why would it want to send any MDNs in the first place?

I did some googling and the pieces slowly began falling into place. It turns out there’s a horrific bug in recent Outlook versions’ handling of read receipts: unread messages deleted from an IMAP folder can send a “not read” MDN, even if you’ve explicitly configured Outlook not to do so.

And as I had just discovered, it isn’t even necessary to delete the messages from within Outlook itself to trigger this behavior. Months ago when I set up Outlook for my IMAP account, I was subscribed to several Debian and other technical mailing lists that I’ve since left (these days I prefer to use the Gmane NNTP gateway to read such lists). Apparently when Outlook started up and noticed that these lists’ mail folders no longer existed on my server, it decided to send a “not read” notification for each unread message that requested one in Outlook’s old cached copy of the folders.

Some searching of the mailing list archives confirmed my hypothesis. Every recipient of one of these mystery messages had posted something to one of these lists, presumably (probably unknowingly) including a Disposition-Notification-To: header in their posts.

I can’t find the words to describe just how wrongheaded this behavior is. Not only is it semantically incorrect — how can Outlook assume that just because a message has been deleted from the IMAP server, it wasn’t first read in some other mail client before being purged? — but it’s a horrendous privacy risk too, and a boon to email address harvesters.

And in this case, it led me to waste two hours of my time as I had to diagnose this unsolicited, seemingly spam bot-like burst of messages that went out through my server.

As much as it has improved over the years, I think this proves Outlook 2010 is still entirely untrustworthy as an email client. Avoid using it if at all possible.

I’m posting this here so I can find it again later, because this one caused a surplus of annoyance before I finally found a solution…

I have a Windows 7 x64 laptop which would randomly (once or twice a week) set the NTFS “dirty” bit on its C: drive, causing chkdsk to run at boot and find… well, no problem whatsoever. Sometimes this glitch would be heralded by a system tray / notification area message that the filesystem was allegedly corrupt, but often there would be no warning (aside from NTFS Event 55 messages in the system event log, or the output of

if I bothered to run it manually), until chkdsk began its long run the next time I restarted the computer. Yeah, I know I could have used

to stop boot-time filesystem checks altogether, but then if there actually were a legitimate problem one day… :)

Anyway, after a couple months of this I finally hit upon this discussion on Microsoft TechNet, which in turn led me to KB 982927, including a hotfix (Fix316593). Microsoft makes you jump through some hoops to get the hotfix (you have to do an email confirmation thing and then even the download is password protected — why?), but after a month and a half I can say this has completely resolved the problem for me with no ill effects.

Hopefully Microsoft will roll this into SP1, since this is a longstanding, seemingly widespread problem, but at least we have this in the meantime…

GTK+ and Haskell (gtk2hs) on Windows

Update: Jacob Stanley has a great article on installing gtk2hs on Windows which goes into more detail, including a tutorial on GTK theming.

Gtk2hs is my favorite way to do cross-platform GUI programming in Haskell — and it’s the toolkit to use if you want to work through the examples in the excellent *Real World Haskell*. But the official instructions for building gtk2hs on Windows leave out some important information, so here’s how I got it all working on Windows 7…

First of all, if you haven’t done so already, download and install the latest release of the Haskell Platform for Windows (version 2010.2.0.0 at the time of this writing). Opt for the installer to add GHC and friends to your %PATH%.

Next download the GTK+ 2.16 all-in-one bundle and extract it to C:\Gtk, then add C:\Gtk\bin to %PATH% by hand. (Alas, I was unable to get gtk2hs 0.11 to build with GTK+ 2.22 — it failed complaining that c:/devel/dist/win32/libpng-1.4.3-1/lib doesn’t exist, and I didn’t feel like messing with it beyond that point.) If you have Cygwin stuff on your Windows path, make sure the Gtk directory has higher priority; you can use PowerShell’s Get-Command to check on this, e.g. run get-command pkg-config and make sure the one in C:\Gtk\bin is listed first.

Verify that the library is installed correctly by running:

The above will report the version number of your installed GTK+ library, e.g. 2.16.6. If you get an error message here then something is wrong…

The gtk2hs documentation claims you don’t need MinGW installed to build on Windows, but this isn’t strictly true from our perspective: you’ll need MinGW’s gpp in order to build Haskell’s Cairo bindings, upon which the GTK module depends.

The good news is that all the MinGW components you need are already included with the Haskell Platform distribution, so just add its mingw\bin subdirectory to your path. Make sure that this, too, has a higher priority than any Cygwin (or SUA, for that matter) entries in the Windows environment variables; the Cabal installs we’ll be doing in a moment will attempt to invoke the strip command at the end of the build process, and things will go south if Cabal accidentally invokes Cygwin’s strip instead. (This had me scratching my head for longer than I care to admit…)

Now you should have everything you need to install gtk2hs from Hackage:

You’re all set, assuming Cabal didn’t encounter any problems. Test it out by creating a file Hello.hs with the following:

Build it with GHC:

And then run Hello.exe. You should see something like this: 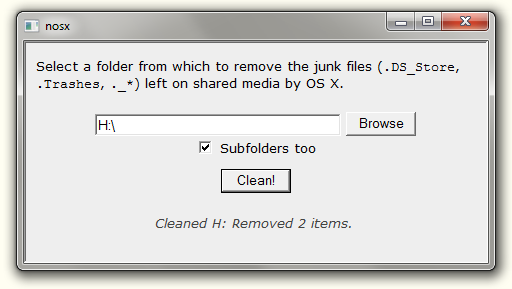 You can download it from my GitHub account if you have a use for this sort of thing. Written and tested with Windows 7 and IE 8; I’m not sure how it will work with earlier versions of either. Standard disclaimers apply: use at your own risk, etc.

Incidentally, I think HTAs are really underrated as Windows scripting goes. More on that topic later…