In love with the BBC micro:bit

I finally got my hands on the micro:bit, the BBC’s new educational computer and spiritual successor to the legendary BBC Micro, and I’m absolutely in love with its potential as a platform for learning how to code. 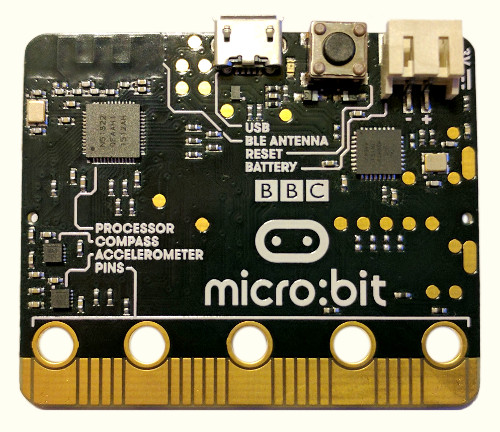 A lean (but not mean) learning machine. I like how the parts are all clearly labeled, as if to say: “There is no magic here. Everything that makes this board work can be understood.”

Microcontroller-based devices like the micro:bit offer some advantages over PCs as a tool for learning about programming. They can be connected directly to a variety of interesting peripherals to motivate experimentation. More importantly, they provide what is, in contrast, a radically simple programming environment: there are no operating systems, threads, processes, filesystems, or virtual memory to hinder a true understanding of what it means, in the most basic sense, for your program to run on a computer. When coding a microcontroller it is (to a certain extent) just you and the CPU.

On the other hand, it can take some effort to get up and running with most microcontrollers’ development environments. Even beginner-friendly kits like the Arduino will require special software and drivers to compile and load your firmware, which can make them a non-starter for some classrooms or casual beginners. And once all that’s set up, you’re likely going to be programming the thing in a dialect of C—not the most approachable choice for a new programmer.

So I’m delighted that the micro:bit delivers all the advantages of a microcontroller while providing an extraordinarily easy to use development system.

First, the platform: at the micro:bit’s heart is an ARM Cortex-M0 microcontroller running at 16 MHz, with 256 kB of flash and 16 kB of RAM. Its peripherals include a 5x5 array of LEDs with PWM, two buttons, a compass, an accelerometer, and a BLE radio; additional peripherals can be attached using a number of pins including I2C, SPI, and digital and analog I/O. 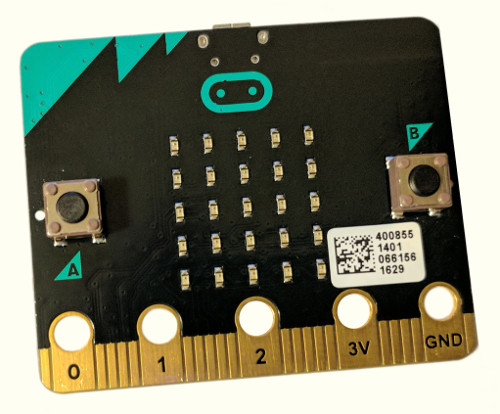 I initially thought the micro:bit’s LEDs and buttons a laughably limiting provision for I/O, but after having programmed it I now think it’s a great idea. It provides just enough pixels to display scrolling text and basic graphics, while remaining simple enough that learners won’t be overwhelmed by a need to employ abstractions like sprites in order to create simple visuals.

As for the development environment, there’s no software to install, which means the micro:bit should be readily usable by schools whose students use Chromebooks (or locked-down Windows machines or Macs). The only prerequisite is a web browser, which allows you to use one of multiple web-based code editors at microbit.org. And once you’ve written your program, there are no special drivers required to flash it onto the board; the micro:bit presents itself as a USB mass storage device, to which you need only download a hex file compiled by the editor in order to run your program.

Hobbyists will likely be drawn to the micro:bit’s MicroPython port (python.microbit.org). This includes a set of well-documented Python libraries to take advantage of the board’s peripherals, including external servos or neopixel LED strips. Advanced users can even access a Python REPL over the board’s USB serial interface.

As an engineer, I’m thoroughly impressed with the achievement of porting Python to the micro:bit. MicroPython generally targets the Cortex-M4, but here they got it running on an M0 with just 16 kB of RAM and no hardware floating-point support.

And it allows you to write succinct little programs like this one, which plays a tone on an attached piezo buzzer with a pitch depending on the angle at which the device is held:

But for fledgling programmers I think Microsoft’s Programming Experience Toolkit (pxt.microbit.org) is the star of the show. It features mostly the same library features as the Python implementation, but it gives the user both Scratch-style block programming and event-driven JavaScript code—and it can translate your programs between one representation and the other, providing a nice set of quick-release training wheels for beginners. PXT also shows the output of your program as you type, in an emulated micro:bit displayed alongside the editor.

Unfortunately, my experience with the micro:bit has not been entirely trouble-free. The first unit I ordered developed a problem where the USB interface chip would overheat while connected to my computer, which has also been reported by other users. After this happened, I could no longer operate the micro:bit using its battery pack, and it would intermittently reset while powered by USB. I got a replacement unit which has yet to develop similar problems, but this experience doesn’t bode well for the robustness of a device that is meant to survive in the hands of 11 to 12-year-old students.

Update: jaustin from the micro:bit Foundation commented on Hacker News,

I work for the micro:bit Foundation, who have taken ownership of the project on from the BBC […] as the author hoped, the revision of the hardware now shipping is more resilient to ESD than the previous one :)

I also have some concerns about the placement of the external pins. Given that micro:bit kits like those sold by Tech Will Save Us use alligator clips to connect to the board’s pins, it seems way too easy to short out one of these pins with its neighbors.

Finally, the micro:bit’s 16 kB of RAM is quite limiting, at least when using the MicroPython runtime. While writing a moderate-size program I managed to repeatedly exhaust the SoC’s memory, resulting in difficult to debug MemoryExceptions. I can easily imagine intermediate users running up against and being confused by this limitation, and would welcome a version of the micro:bit with double the RAM. But to be fair, I have not yet tried writing a program of similar size with PXT, which may have less overhead or may handle memory exhaustion with clearer error messages.

The above pain points aside, I’m extremely optimistic about the micro:bit’s potential for introducing a new generation of students to programming. I imagine that the overheating USB chip issue will be resolved, perhaps by a new board revision, and I’m looking forward to this board being generally available for distribution to schools in the USA and elsewhere.

Recently the Guardian published a story falsely claiming the existence of a “backdoor” in WhatsApp. They have since edited the article to instead refer to the behavior in question as a “vulnerability”, but even this is only true in a very specific and limited sense—a nuance absent from the paper’s bombshell presentation of the finding and which, unfortunately, much of the story’s audience will not understand.

This article risks grossly misleading people into abandoning an end-to-end encrypted and forward secure messaging app in favor of materially less-secure alternatives, so I feel it is important to point out:

Zeynep Tufekci wrote a wonderful open letter explaining the problems with the Guardian’s story and calling for its retraction. This letter is signed by more than 60 leading cryptography and security researchers and professionals, and is well worth a read if you’re interested in why this story is so dangerously misleading.

I also recommend reading Moxie Marlinspike’s rebuttal to the Guardian’s story to settle any lingering doubts. The bottom line: if you’re using WhatsApp, this presents absolutely no reason for you to stop.

I finally got around to modernizing this old site, which has included moving from WordPress to a statically-generated, Amazon-hosted site based on Pelican and Bootstrap 3.

I’ll write more about the site’s implementation later because I ended up diving into different areas I think are worth documenting, such as extending Pelican via plugins and some specific issues with hosting a static site on top of Amazon AWS. For now, suffice it to say that if you find any files missing please let me know, as this is probably something I’ve simply forgotten to copy over to the new site.

(Support for IE 8 and older is right out, on the other hand; use IE 10 or better to preserve your sanity.)

Debugging the OpenBSD kernel via QEMU

Recently I had to track down a minor bug in the OpenBSD kernel. I tapped QEMU and GDB as debugging tools for the task, running on Ubuntu 12.04 as the host OS. This combination worked extremely well, so for the record here’s how I set it all up.

OpenBSD comes equipped with two kernel debugging mechanisms: ddb and kgdb. ddb(4) is an in-kernel debugger, enabled by default in the GENERIC kernel, and can be invoked either explicitly from the console or automatically in the event of a panic. It is analogous to the Linux debugger kdb in that it can be used to set breakpoints and examine the stack or register state, but (like kdb) it is not a source-level debugger.

For source debugging there is kgdb(7), which offers the ability to remotely debug the kernel by way of a GDB stub running over a serial port; this is similar to the Linux debugger kgdboc. However, kgdb it is not available in the GENERIC kernel, and it imposes an additional set of configurations and debugger latencies on the user. If your debugging task is amenable to running OpenBSD within a virtual machine, as mine was, then there is an easier and better way…read more

I love Emacs GDB mode, but I always found it annoying that there is no given key binding (or function which could be directly mapped into a key binding) for switching between the different views given by gdb-many-windows. The usual window and buffer switching functions are insufficient because the GDB windows are flagged as dedicated (so switch-buffer refuses to swap them in place), and in the case of the Locals/Registers and Breakpoints/Threads windows, the buffer you want to visit doesn’t necessarily even exist until you click that button.

This went from mildly annoying to a major headache when I needed to run the debugger in a remote Emacs session, over SSH from Mac OS X’s Terminal.app which does not support xterm mouse emulation. So I wrote this gdb-select-window function and corresponding key bindings to finally get the desired behavior…

Put this in your ~/.emacs.el or init.el and fire up gdb-many-windows, and then you’ll be able to quickly switch between the GDB windows with the following keyboard shortcuts:

Both true and false: a Zen moment with C

I ran into a really fun bug at work yesterday, where I discovered that my C program was branching down logically inconsistent code paths. After drinking another cup of coffee and firing up GDB I realized that somehow, a boolean variable in my code was simultaneously testing as both true and not true.

While I cannot reproduce the actual source code here, the effect was that code like

would produce the output:

So what’s going on here?read more